East Doncaster Baptist Church began in May 1964 with a membership of 30 in a private home. The present ¾ acre site was purchased for a future manse for 1780 pounds. A tender of 15,165 pounds for an all purpose hall was submitted and the hall built. Additions were made to the building in 1983 to create an office for the minister, a lounge and a main office. 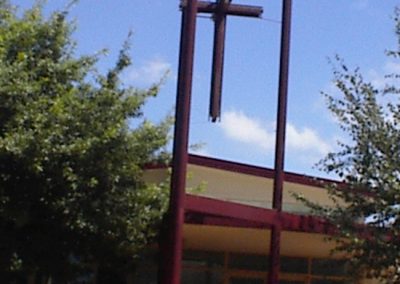 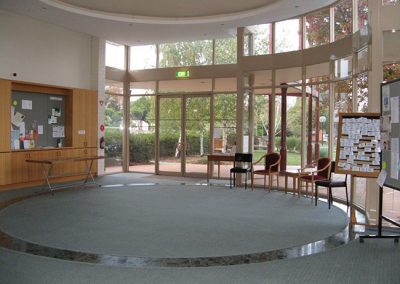 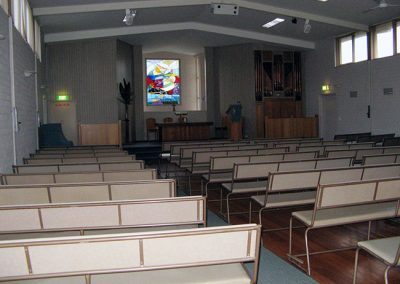 The window is in style a semi-abstract work of art. That is, the artist, Stephen Hennessy, has in its design used both recognisable images and non-representational shapes. He has employed imported antique glass and glass textured in various ways. Because of the size, weight and shape of the window (the glass, the lead) there has been an engineering challenge involved in its installation.

The symbolism circles about the concept of the human journey to the openness ultimately afforded by God. The design involves a strong spiralling motion from an earthly beginning to a free state (at the top of the window) of knowing and being known. The elliptical movement in the window captures facets of human experience, represented by pockets of bright colour and detail.

The dynamic and regenerative qualities of water appear in the shimmer of rippling textured glass and the pale blues, the bright aquas, the water of baptism. Then the journeying soul is confronted with a great mystery, that of God entering human flesh.

The wine-dark crushed grapes and ears of wheat speak of the life and death of Jesus Christ, the blood poured out and the body broken. Through the mystery, the soul enters into a great heaven of glorious resurrection and swirling freedom. The soul has come home in radiance and joy. 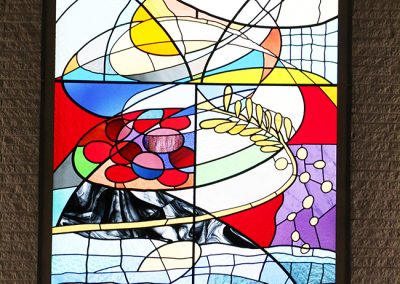 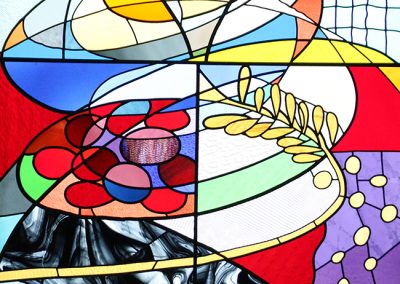 The pipe organ in the East Doncaster Baptist Church was generously donated to the Church by Mrs Phyllis Corben and her family in 1993. The organ was built in 1895 by Mr Josiah Richard Remfry of Ballarat. He migrated to Australia from England at the age of 11, settled in Ballarat as a school teacher and developed interests in astronomy and pipe organs.

The organ he built exhibits a painstaking attention to detail and craftsmanship which is incredible for an amateur tradesman. An interesting sidelight is a report that Mr Remfry’s children were required to sit upon parts of the organ whilst glue was drying and while their father read books to them. It was finished in an attractive blackwood case with dummy display pipes painted pale green and diapered.

The organ was removed from Ballarat following Mr Remfry’s death in 1918. His son Mr Maurice Remfry moved it to his residence at Gardenvale and then in 1939 to East St Kilda where the organ was installed in its original state.

Mr Maurice Remfry died in 1952 where upon it was sold to the Methodist Church at West Bentleigh for 150 pounds. It was installed and maintained by Mr Hayes. In 1959 the members of the church felt that the organ did not display sufficient power to accompany congregational singing and so it was replaced by an electric organ.

The organ was sold to St Paul’s Church of England in Ringwood for 450 pounds where it was installed and maintained by Mr Marriner. It would appear that in the transfer the show pipes and part of the case work disappeared.

In 1967 the Church of England property was bought by the Eastland Shopping Complex, and the organ was stored with a view to rebuilding it in their new church in Warrandyte Road. In removing the organ from the Church, the case work, pedal board and stool disappeared. On completion of the new Church, the rebuild was abandoned and an electric organ was purchased. The remains of the organ were given to Mr Marriner and the original manuals were acquired by Mr I Morton of East Malvern.

The organ was purchased by Mr S Day of Glen Waverley who stored it with other parts. In 1974, the remains of this organ were purchased by Rob & Keith Corben for 900 pounds. These parts consisted of all pipes, chests and frame, reservoir and blower.

The organ was lovingly rebuilt by the late Robert Corben and his brother Keith as a residential organ for Robert’s home in Blackburn. The opportunity was taken to convert the organ to a classical specification with assistance from Mr John Parker. A new case of Victorian Ash and burnished copper show pipes were added. Following Robert’s death in 1991, the Corben family donated the organ to the Church where Robert was a valued member.

In accepting this generous gift, the Church employed Stewart Organs to install the organ, taking the opportunity to transform the instrument from a residential organ to a Church organ. 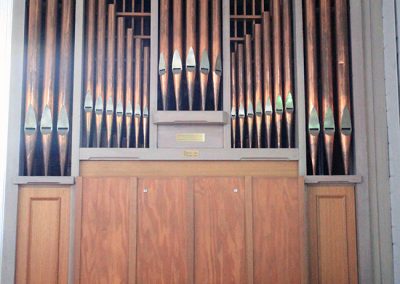 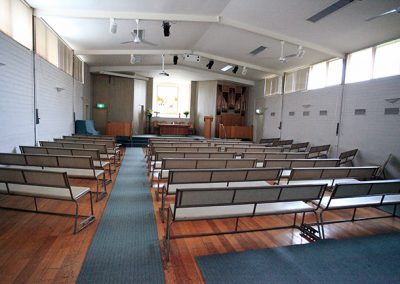 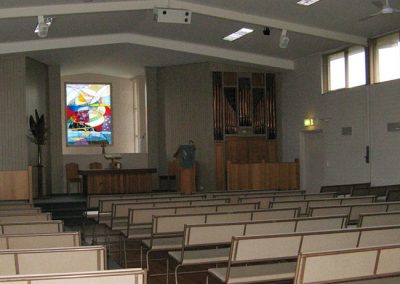 Join us next Sunday for our Worship Service